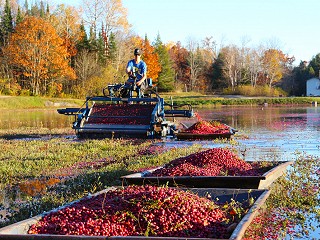 Ontario’s woods are ablaze in fiery shades throughout October. At the same time as forests are being transformed into a painter’s palette of colour, harvest season is in full swing. It makes for an ideal season to escape and unwind at one of the province’s resorts; wander along country lanes lined with maples turned cherry red, harvest apples by the bushel in orchards strewn with copper-coloured leaves, or simply curl up by a crackling fire-pit to inhale the scent of autumn. October is all about experiencing the natural bounty of Ontario’s magical autumn season. Perhaps in no place does the bounty of the season—brilliantly-coloured leaves and flavorful crops—come together more perfectly than in Muskoka, home to some of the best leaf-peeping in the province and as well as to our most distinctive autumn crop, the crimson cranberry floating languidly in their flooded fields. With 11 hectares in cultivation producing 137,000 kilograms of cranberries each year, Johnston’s Cranberry Marsh is the second largest cranberry farm in Ontario, and the only one with its own winery (www.cranberry.ca). It’s also the oldest, established in 1950 by Orville Johnston. His son Murray, along with his wife, Wendy, and their children, continue the much expanded operation today. Thanks in large part to their efforts, the cranberry has become synonymous with autumn in Muskoka, serving as the inspiration for the can’t-miss Bala Cranberry Festival (October 14-16, www.balacranberryfest.com) “The biggest misconception about cranberries—and there are many—is that they are an aquatic plant. They actually grow in boggy fields. It was discovered that ripe cranberries float in water, and so it became common practice for farmers to flood fields in the autumn to facilitate harvesting,” explains Wendy, one of many fascinating facts you discover during the daily bog-to-bottle tours of the farm (recently named a Signature Canadian Experience). During October you can watch as berries are harvested from the flooded fields, enjoy wagon rides of the bucolic property, wade in amongst the berries for a priceless photograph, and sample a number of delicious cranberry wines in the Cranberry Café. An autumn day at Johnston’s Cranberry Marsh is a truly memorable experience. A warming postscript to cranberry cravings and arboreal amblings can be found at a number of nearby resorts, including Sherwood Inn (www.sherwoodinn.ca), a cosy yet elegant hotel on Lake Joseph just a short drive east. When you arrive at Sherwood Inn, you slip into a slower pace of life. You can’t help yourself. True, the property boasts the amenities required of a modern resort—a comfortable spa with staff as soothing as the treatments themselves, a fine dining restaurant with world-class food that manages to be both sophisticated and hearty at the same time—but in general pleasures are simple. When Charles Draper built the inn in 1939, his vision was of a property more akin to a cottage than a hotel, where personal service and a sense of intimacy would be the main drawing cards. Much has remained the same in the 75-years since. The main lodge is still nestled snuggly among century-old pines. A calming tranquility still prevails. And the tradition of excellence in hospitality that has been a part of Sherwood Inn’s history remains very much alive. Sherwood Inn is also famed for its fine dining. Executive Chef Everett Bell was born and raised on Lake Huron’s North Shore, and brings distinctive cottage country flavors to the menu. When days shorten and temperatures drop, Bell likes to introduce fresh cranberries into his menu as a nod to the season.

“My grandparents had a farm on the North Shore, so I gained an appreciation for fresh, local food. The only experience most people have with cranberries is canned cranberry sauce, but these tart berries can be used for so much more (see recipes below),” Bell explains. Nature’s bounty, in the form of spectacularly colourful scenery and farm-fresh food, makes October a truly unique season. Make the most of this fleeting season with days spent escaping and unwinding at one of Ontario’s resorts. Sherwood Inn isn’t the only resort from which to base a weekend spent indulging in cranberries and marveling at brightly-coloured landscapes. Also nearby Johnston’s Cranberry Marsh are Rocky Crest Resort, Shamrock Lodge, Windermere House, Trillium Resort and Spa, Grand Tappattoo Resort, and JW Marriott, the Rosseau.  And of course, cranberries aren’t the only crops being harvested this time of year. Apples, corn, garlic, pears, pumpkins, squash, and a host of others are available at market stands and pick-your-own farms across the province (to find them, go to www.HarvestOntario.com) Wherever you vacation in Ontario, whichever resort calls out to you, there are certain to be an open-to-the-public farm nearby.  Andrew Hind is a freelance writer specializing in travel and history. He is the author of 19 books, including Muskoka Resorts: Then and Now and most recently Patterson-Kaye: A Celebration. He can be reached at maelstrom@sympatico or followed on Twitter @discoveriesAM.   Cranberry Vinaigrette 1 cup cranberry juice ½ cup white balsamic vinegar ½ cup honey 1 cup frozen or fresh cranberries 1.5-2 cups olive oil 1 tbls Dijon mustard