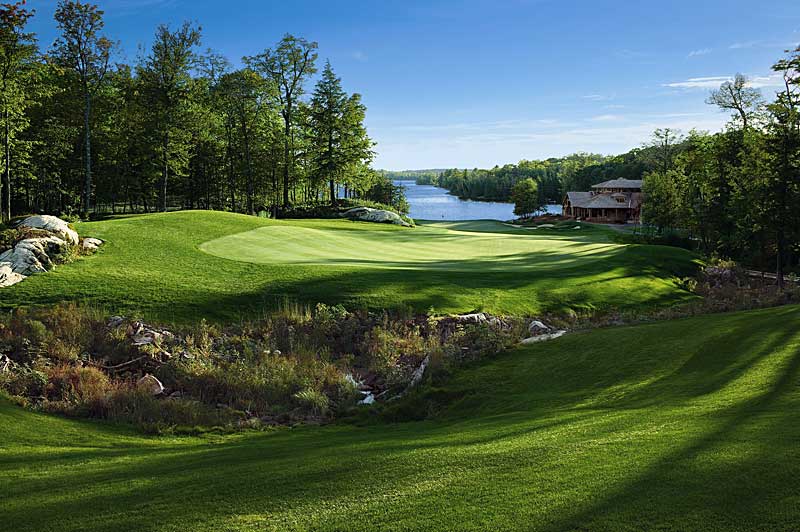 [/caption] One of the advantages of working in the Canadian tourism industry is that I get to play a lot of golf on different courses across the country. In the province of Ontario where there are over 800 courses to choose from, we're working with Resorts of Ontario this year. Many of its one hundred resort hotels, lodges, country inns and cottage resorts either have golf on-site or they have playing privileges at private and public courses nearby. Several have famous golf architects attached to them like Brookstreet's Trent Jones course near Ottawa. It's owned by Sir Terry Matthews who also owns the Celtic Manor in Wales, the venue for the 2010 Ryder Cup. Others may not be as well known but they still offer challenging play. A couple of weeks ago, I asked the resort owners if they would send me their golf news for 2009. Many included their new golf packages as well and there are a number of good deals. Here's is just a small sample of what I was sent: Pine Vista Resort in the Kawartha Lakes, is partnering with Wildfire this year, a new McBroom-designed course just five minutes away. • Clevelands House in Muskoka, has its own 'executive 9' which is great for families and this year it is also packaging with The Rock, the redesigned Nick Faldo course, one minute away. Also in Muskoka, Deerhurst Resort has a new Island & Highlands golf package that includes a round of golf for two at Deerhurst Highlands and Bigwin Island. Its 18 hole Lakeside course is also good for families. • At Bayview Wildwood, guests can opt to play two out of five courses on a two-night package offered all summer long with dinners and breakfasts included, starting at $344pp/do. The choice of courses are: Hawk Ridge, South Muskoka GC, Bonaire GC, Lake St. George GC and Settler's Ghost. • Closer to Barrie, Carriage Ridge Resort partners with Settler's Ghost, Horseshoe Highlands with Horseshoe Valley and Hawk Ridge, and has an early spring rate starting at only $89pp/do. • The Briars on Lake Simcoe, has a mid week spring special that includes two nights, two breakfasts and two rounds of 18 for just $129 per person per night based on double occupancy. Cart is additional. Lots more can be found by clicking on "Golf" at Resorts of Ontario.